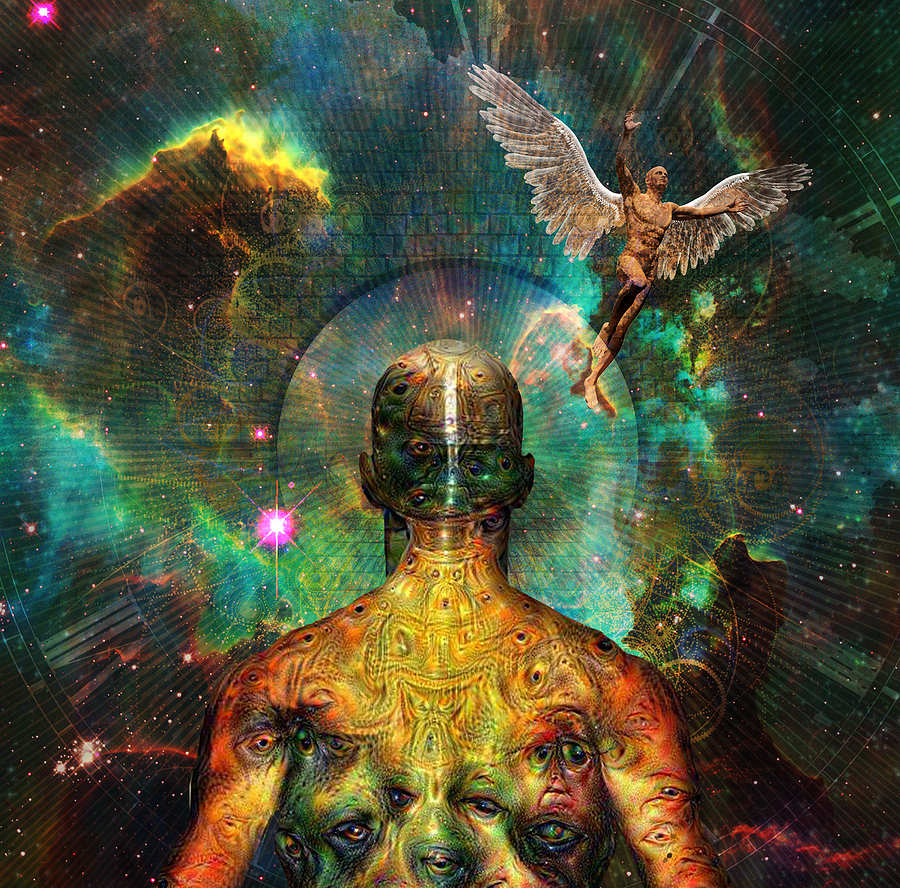 Is it true that everyone is born for a purpose?  What about the one-night stand that produced a set of twins, the child born of an incestual relationship, or an unfortunate rape?  Do these children serve a purpose?  I don’t pretend to know for certain, but the Men, Djinn & Angels theory provides an explanation – thanks to the Amatrix Angels.

Delicate and often unnoticed, these angels – no bigger than the tip of one’s pinkie – float between the causal plane and other cosmic realms.  The causal plane, overlapping the astral and devachan planes, is home to Lake Eidos.  This lake contains a mystical liquid that spills into it from the highest peaks of, Mount Muqeet, otherwise known as Mount Meru in Utatezi sacred literature.  In some eastern teachings, Mount Meru is the meeting place between divine realities and the physical world.  Cosmic energy flows down the mountainside and collects in Lake Eidos. There, it waits for the Amatrix Angels who dip their spiny bodies in it.  By absorbing this liquid, conscious energy, the angels play a role in the Principal of Rhythm.

The multiversal Principal of Rhythm explains the systematic destruction and repair of the cosmos.  The Principal of Rhythm asserts that nothing is motionless.  The static forces of peace and moderation surrender to dynamic forces of destruction.  When the dynamic period ends, the Amatrix Angels plant seeds of reconstruction and rejuvenation.  They deposit droplets from Lake Eidos throughout the cosmos to aid its healing.  When the seeds burgeon, the cycle continues.

When Sephandor, from the haliasai race of djinn, seeks to create a weapon to destroy angels, he receives advice from Ant’harratu, the wise vetala. With his clairvoyant ability, common among vetala, Ant’harratu learns that the photons in Amatrix angels have destructive and creative gifts.  Because the angels dip into Lake Eidos so often, they become saturated with conscious energy. This divine energy makes them equally destructive and creative.  Sephandor plots out to capture an Amatrix Angel.  When he succeeds, he rips it limb from limb, only to see that the angel self regenerates.  With such physiological knowledge, Sephandor understands that he only needs one angel for his scheme to work. After teaming up with the wind spirit, Tephras, they create a weapon called the Torkhalsi.

Powered by the Amatrix Angel’s energy, the Torkhalsi was designed to throw photons at its target.  It was used to destroy the angel, Dophiel – causing it to implode.

When King Solomon captures Sephandor to build the temple of Jerusalem, he confiscates the weapon and leaves it in charge of the djinni, Pyro.  After ordering Pyro to hide the weapon, Solomon curses the djinni. The curse made it impossible for Pyro to speak the truth, and even worst, the djinni believes his lies.  Since Pyro thinks his lies are true, he never definitively says or knows where he hid the weapon. Some believe it is lost forever.

The Men, Djinn & Angels Theory asserts that when an embryo reaches its forty-ninth day, an Amatrix angel plants a droplet in it.  This droplet becomes the energy inside the kundalini.  As Mumar explained to Talib, the kundalini lies dormant inside the human body until stimulated by nature – sunset, beautiful flowers, tribulation, or trials.  Once activated, the carrier realizes his or her purpose.  This realization causes one to feel small yet connected to something more significant.  The Men, Djinn & Angel Theory maintains that, since djinn cannot attack Amatrix Angels without retribution, they plot to sabotage the rejuvenation system through human beings.  They do this in many ways.

Quite often, the spiritual traveler comes across a long row of cells in the astral plane.  Between the rows walk the priests of Agaliarept, the Retzel race of djinn.  Part of the Lemurian sect, these djinn lure teenage human souls into the cells.  Once the naive soul enters, the mental and emotional onslaught begins.  “No one cares!” they yell.  “It’s your life, you don’t have to listen to no one but yourself.”

A captivated audience, the teens drink the rhetoric of rebellion and self-destructive behavior typically associated with them.The Retzel’s primary mission is to create emotional energy to extract from the youth.  The secondary mission is to distract their victims from nourishing their seeds.

By creating stress and fear, the predator djinn blocks their victim’s pursuit of purpose with chakra clogs. If the clogs are not cleared, the energy inside the kundalini stagnates. Stagnated energy is potential energy.  Potential energy changes into emotional frustration, depression, and deviance.  Even if the human carrier procrastinates and never attempts to fulfill his or her purpose, the kundalini’s energy eventually gets extracted. Then, the victim is irreversibly unaware of his given purpose. As a result, the carrier fails to use his or her talent, and the multiverse cannot heal.

When Chanoch visits the Utetezi temple, he learns a valuable lesson.  “The only true sin is to fail at one’s purpose.  For we do not know how that energy will recycle.”

The sage means that the seed energy is not destroyed but recycled or changed into something else.  If humans are fortunate, the unused seed energy returns to Lake Eidos and recycles to another embryo.  This may take a millennium. In the worst-case scenario, the seed energy changes and never returns in the same form. The result is that some human ailments may never cure, and some conditions never improve.

But, if carriers successfully strengthen their connections to the energy source, the seed burgeons, and human suffering could end. The sage calls that source the higher consciousness of the universal mind – The One (Some say G-d).

However, the djinn do not grow tired of interfering with the connection.  We must become aware of our daily obligation to strengthen or sustain the link.  Maintaining connectivity happens by clearing the chakras, yoga, meditation, and academic study.  It is intensely established by the intentional pursuit of our real purpose.  We will inevitably fail ourselves if we do not recognize that the seed planted in each of us, on that forty-ninth day, is medicine for the multiverse.  It sustains the Principle of Rhythm.

The Men, Djinn & Angels Theory asserts that while everyone may not have been born for a purpose, everyone, including those not privileged to birth, have a significance. It asserts that somewhere in that lake of consciousness are droplets of scientific breakthroughs that may cure cancer, save children from autism, or grandparents from dementia.  Let’s hope those who receive such droplets are given a fair chance to live and connect with The One.